“We have to find a way to have the dress glow.” Marlene Dietrich

Marlene dreamed, and we made it happen.

Marlene Dietrich was an internationally acclaimed actress, a role model to many women, a live performer and much more. She was a FashionTech visionary! This icon dreamed up inventive and avant-garde ideas that were ahead of her time.

The way Marlene planned her stage performances was phenomenal. She was known as a master of lighting. Besides meticulously creating her dresses with her haute-couture designer, Jean Louis, she would also make plans for the stage lighting. She truly wanted viewers to be awed when they focused on the effects of her ideas, whether it was through her fashion, the lighting or both.

In 2017, the founder and CEO of ElektroCouture, Lisa Lang, found Marlene’s personal letters in the archive of the Deutsche Kinemathek. To mark the 25th anniversary of Marlene’s death, the ElektroCouture team decided to fulfill her wish, and Marlene’s last dress was finally realized.

For the creation of the dress, we collaborated with Swarovski for the custom-made crystals, which perfectly suit the material and the e-broidery® technique by Forster Rohner Textile Innovations, which uses Osram LEDs. The dress was made by combining new technology with traditional craftsmanship. It required 151 LEDs, 313 flowers and 2371 specifically-developed Swarovski crystals. The dress’s embellishments can be switched to different light patterns, matching the moods in Dietrich’s songs.

If you want to know more about this story, you can view the documentary, “The Last Dress of Marlene Dietrich” below, or see our publication in Google Arts and Culture.

As we say, Marlene dreamed, and we, ElektroCouture, together with the contribution of fashion designer Anja Dragan, made her dream a reality. 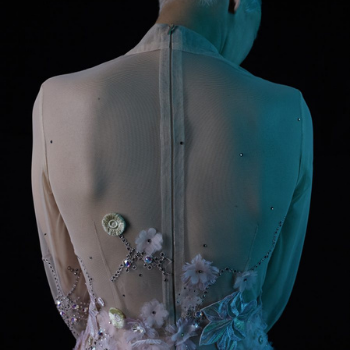